In the 1990s, discussions began between mining companies and various Governmental departments at national and provincial level, to source raw water for mining activities along the Eastern Limb in Limpopo Province.

The position of the Department of Water Affairs and Forestry (DWAF) at the time was that there was no water available for industrial / mining ventures until a new dam could be built within the Olifants river (which was the Rooipoort Dam on the Olifants River but later changed to the De Hoop Dam on the Steelpoort River). However, it was also noted that the water allocation of the Arabie Irrigation Scheme (a water infrastructure scheme drawing water from the Arabie dam, later re-named the Flag Boshielo dam) was not being fully utilised.

After much discussion, the DWAF agreed, with the consensus of the Department of Agriculture, that a government water institution, to be called the LWUA, would be temporarily licensed to abstract a specified volume of water out of the Olifants river from the Flag Boshielo dam. This allocation was to be “borrowed” from the non-utilised irrigation volume for a period of seven years. LWUA, it was agreed, would also fund and construct the associated bulk raw water infrastructure on the Havercroft farm.

Following consultations with communities along the pipeline route and a rigorous tender process, LWUA commissioned the construction of the abstraction weir, settling ponds, pump houses, storage dams, pipeline, and associated infrastructure in what became known as the Lebalelo Scheme. This bulk raw water infrastructure scheme now comprises of a 110 km pipeline from the Olifants River passing along the various mining operations and communities. The construction was completed on time and within budget in 2002.

During the building of the scheme, provision was made for abstraction points where DWS or any other Water Services Authority (WSA) would be able to abstract raw water for purification and supply to 103 villages, demarcated by the Local Government.

It was in 2005 when LWUA was granted permission to extend its area of jurisdiction and admit new members to the Association. Following this, the southern extension of the LWUA pipeline was built, with construction being completed in 2007.

In 2012, the Association also opened discussions to further extend LWUA’s jurisdiction to include the Flag Boshielo / Mogalakwena Regional Raw Water Scheme (the Northern Extension / Northern Limb). However, no formal agreement was reached for the extension among the parties involved.

In parallel to LWUA’s construction of the Lebalelo Scheme, what is now known as the Department for Water and Sanitation (DWS) conceptualised the Olifants River Water Resource Project (ORWRDP) to address the water needs of the middle Olifants river catchment area in Limpopo Province. The aim of the project was to build a new dam and pipelines to take pressure off of Flag Boshielo Dam, the key regional source of water in the area, in order to provide water to the water stressed city of Polokwane, and, in doing so, free up water for the water stressed Mogalakwena Local Municipality area. 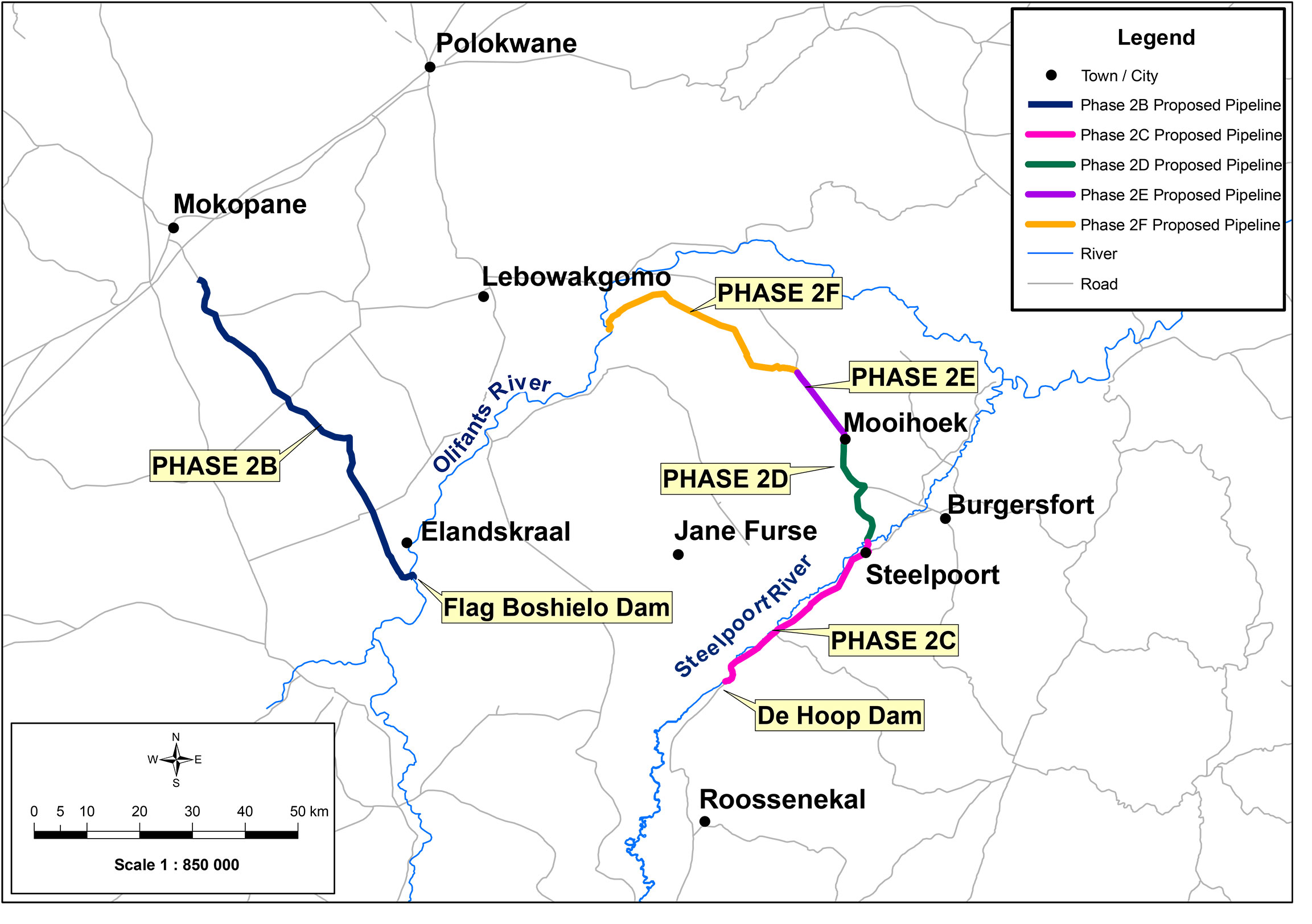 Phase 2 – balancing water utilisation in the middle Olifants river catchment and transferring certain water use licences from Flag Boshielo Dam to the De Hoop Dam for industrial, agricultural and community/social use. Thus, the various sub-phases of the ORWRDP phase 2 are pipeline projects delivering raw water to different areas. The raw water would then be treated to become potable water and reticulated to the communities. The water treatment and reticulation would be funded by investment loans backed by off take agreements from the commercial users, i.e. the mines.

Phase 2B – construction of pipeline from Flag Boshielo dam to Pruisen

Phase 2E – construction of pipeline from Mooihoek to Clapham

Phase 2F – construction of pipeline from Clapham to Olifantspoort

Phase 2H – incorporation of the LWUA scheme into the ORWRDP scheme upon completion of phase 2C, 2D and 2E

The purpose of the JWF is to discuss water related matters between commercial users and government in the spirit of co-operative governance as reflected in the Constitution of the Republic of South Africa. The membership of the JWF comprises of approximately 20 mining companies / operations spread across the Eastern and Northern Limb. The JWF generally constitutes a loose association of private sector interested parties involved with mining. All of Lebalelo’s current members are also members of the JWF.